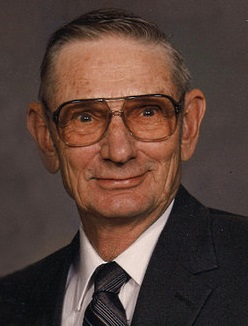 Burial will be in the church Cemetery in rural Alpha.

Online condolences to the family may be sent to www.kramerfuneralhome.com.

Rudolph “Rudy” George Schoewe was born on June 26, 1924 in Kimball Township, Jackson County, Minnesota, the son of Rudolph and Maria (Oeltjenbruns) Schoewe. Rudy attended a country school half a mile from his home.

He enjoyed hunting, fishing and trapping and continued those interests all his life. As a young man he enjoyed playing softball.

On September 12, 1943, he was united in marriage to Ruth Shewmaker at their Kimball Township home. They were married for 70 years.

He was been a life-long member of Immanuel Lutheran Church in Kimball Township. Rudy farmed the land homesteaded by his grandparents until he moved to Trimont in 1980.

Rudy was treated for chronic illnesses for many years. He attributed his long life and ability to stay active to the Department of Pulmonary Medicine at the Mayo Clinic. He remained positive and interested in his family until his last day.

Rudy was preceded in death by his parents; his wife, Ruth Schoewe on June 5, 2014; son, Charles “Butch” Schoewe and other relatives.