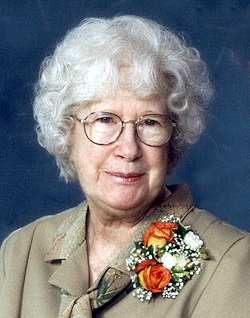 A Celebration of Life service for 84-year-old Peggy L. Romsdahl of rural St. James, Minnesota will be at 1 p.m. on Friday afternoon, Friday, December 15, 2017, at Zion Lutheran Church in Odin, Minnesota, with Pastor Carla  Reierson officiating. The church is located at 201 Watonwan County Road #19 North.

Burial will be in the Kansas Lake Lutheran Cemetery in rural Butterfield, Minnesota.

Messages of sympathy may be sent to the family online at www.kramerfuneralhome.com.

Peggy Lucille Kading Romsdahl, daughter of Arnold and Ruby (Rhoads) Kading, was born on January 25, 1933, in St. James. She was baptized and later confirmed at the First Presbyterian Church in St. James. Peggy was raised in St. James where she attended elementary and high school. She played the baritone horn, alto and French horn in the school band, and later in the St. James Fire Department Band.

On November 24, 1951, she was united in marriage to Norman Romsdahl at St. James. Peggy was a member of Zion Lutheran Church in Odin, and Kansas Lake Lutheran Church, rural Butterfield, where she sang in the choir and the Chirakaures, taught Sunday School and Vacation Bible School, and was a Christeens Youth Group Leader and held various offices in the Lutheran Church Women.

Peggy was very interested in history and researched and wrote several family histories. She was very talented and created Hardanger pieces, counted cross-stitch wall hangings, knitted and crocheted afghans and sweaters and sewed clothing, baptismal gowns and wedding gowns. She also enjoyed cake decorating, gardening and craft work. Peggy was part of the hand bell choir at Truman Senior Living and was always ready to play a game of Farkle. She was an avid Minnesota Twins and Minnesota Viking fans and loved watching the games. In 2010 she became a resident of Truman Senior Living in Truman.