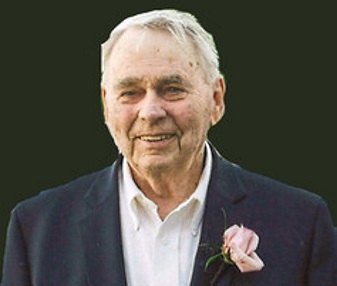 A Celebration of Life service for 91-year-old  Melvin A. Sandberg of fural Butterfield, Minnesota will be held at 10:30 a.m. on Saturday morning, November 4, 2017 at Zion Lutheran Church in Odin, Minnesota with Reverend Carla Reierson officiating. The church is located at 201 Watonwan County Road #19 North.

Burial will be in the Zion Lutheran Cemetery in rural Odin.

Messages of sympathy  may be sent to the family online at www.kramerfuneralhome.com.

Melvin Arnold Sandberg was born on May 2, 1926, the son of Frank and Lilly (Holland) Sandberg in Long Lake Township, Watonwan County, Minnesota. He was received into the Kingdom of God through Holy Baptism on June 6, 1926 at Long Lake Lutheran Church and later confirmed in 1941 at Zion Lutheran Church in Odin.

Melvin received his education in country school in District #50 in Long Lake Township and later attended school in St. James. Melvin worked at the Toro Plant in Windom, Minnesota and then for Art Jacoby on his farm.

On September 3, 1948, he was united in marriage to Agnes Derksen at First Mennonite Church in Mountain Lake, Minnesota. After their marriage, they farmed in Long Lake Township until moving into Odin. In 1952, they purchased a house in Cobden, Minnesota and that was moved to Melvin’s parents farm in Long Lake Township. Then they moved the house in 1958 to their present farm where they resided. Melvin continued to farm until 2002, when he turned the farm over to his two sons. In March 2017, became a resident of the Good Samaritan Society-Sogge Memorial in Windom.

He was a member of Zion Lutheran Church in Odin, where he held various church offices.  He served on the board of the Luther Memorial Home in Madelia, Minnesotae for many years. Melvin greatly enjoyed farming and doing custom corn-shelling.

In his spare time, he could be found golfing, bowling, watching the Minnesota Twins, playing billiards and cards and watching his grandchildren’s sporting events.

Melvin was preceded in death by his parents, son-in-law, Jerome Schuder; sister, Florence Baarson and brothers-in-law, Olgar Baarson and Harry Derksen, Joe Simeroth and Truman Johnson; father and mother-in-law, Ben and Tina Derksen;  and other relatives.