The evening in the school’s auditorium and featured the kindergarten through grade five choirs, under the direction of MLES Music Teacher Sarah Tailowright; the sixth-grade choir, led by Martha Standerwick, also a MLES Title I Teacher and the fifth- and sixth-grade bands, directed by Mountain Lake Public School Instrumental Director Kurt Jahnke.

Special moments of the program came when the guests at the concert combined with the students involved to carol together on some favorite holiday classics, including “Jingle Bells,” “Frosty the Snowman,” “Silent Night,” “Rudolph the Red-Nosed Reindeer” and “Deck The Halls!”

Below is a photo gallery from the event: 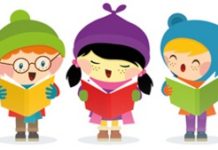