Annual fundraiser for school began in March 1966; held on Friday

The annual Mountain Lake Christian (MLC) Borscht Supper – a fundraising event for the school for the past 51 years – since March 1966 – has cemented Mountain Lake’s recognition as “Borscht Belt” leader. This moniker makes sense as Mountain Lake has a history steeped in the immigrants from the Ukraine who settled the area approximately 200-years-ago where borscht was a staple dish.

“This event was created to honor that Mennonite heritage of both MLC and the Mountain Lake community, as well as to raise funds for the school,” says MLC Administrator Dr. Mike James.

This year’s event will be held this Friday, November 3, serving from 4:30 p.m. to 8 p.m. at the school, located at 710 11th Street North. The meal cost is $8 for adults and $4 for children in grades kindergarten-to-12. Gluten-free borscht will also be available. All-you-can borscht (and all-you-can-eat homemade bread) are topped off with homemade pie.

Per tradition, 34 kettles of borscht (a type of vegetable/beef soup) simmer on the stoves in the MLC kitchen on Borscht Supper Day. Of course, the prep work began the previous day, with young-and-old, student, alumni, parents, grandparents and friends of the school chipping in to prepare the ingredients for cooking (based on an original recipe from Mrs. Ted Klassen, president of the Mountain Lake Hospital Auxiliary).

The first borscht supper used as a fundraiser for the school was on March 29, 1966.

However, the tradition of a borscht supper served up annually in Mountain Lake began many years prior to 1966. The original borscht supper by the Mountain Lake Christian School was a fundraiser for the Mountain Lake Hospital Auxiliary.The soup was cooked in the former hospital kitchen and served in the nursing home located next door. When the Eventide Home was built, the cooking was moved into the basement of that building – over two gas-heated cauldrons. (One cauldron held four canners – or recipes – of borscht. Eventually, the hospital auxiliary turned the project over to the Christian School Auxiliary.

That auxiliary continued the precedent of cooking the soup in the basement of the Eventide Home and transported to the Mennonite Brethren Church (Community Bible Church) for serving. The cooks were Mrs. A. P. Quiring and Mrs. Henry A. Stoesz, assisted by Adeline Friesen. Both Quiring and Stoesz were borscht-cooking veterans from the hospital auxiliary.

Four four years, the borscht was transported from its Eventide Home cooking location to four different churches for serving.

In January 1969, the new school building was dedicated, and that prompted the first serving of the borscht supper at the school. The soup was still cooked at the Eventide, but transported to the school.

It was in 1975 that the borscht was first cooked at the school; the meat cooked at the Evangelical Mennonite Brethren Church (Cornerstone Bible Church).

In 1989, the daughters of Mrs. Quiring, Adeline Friesen and Geneva Stoesz were placed in full charge of the cooking. This year notes the 26th year that Geneva Stoesz has served as a borscht cook. Joining Stoesz as cooks in the kitchen have been Marsha Espenson and Gladys Friesen, along with Miranda Stoesz.

Today the borscht supper tradition is organized each year by the MLC Auxiliary, a group of women dedicated to supporting MLC.

A sidebar bonus is that the borscht can also be purchased to take home and savor – in three sizes – quart, three-quart pail and gallon pail.

All funds raised by the borscht supper go to the MLC Scholarship Fund, enabling more families to sent their children to MLC.

A bake sale is also part of the borscht supper, and this year, middle school students (grades 6-8) are the organizers.

For more information about the borscht supper and the school, visit www.gomlc.org or call the school at (507)427-3900. 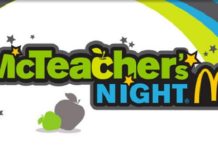