They have been threshing the small grain the third weekend in August now for nearly a half century.

This year was no exception.

There is more that calls people to the Butterfield Steam & Gas Engine Show (a.k.a. Butterfield Threshing Bee) beyond separating the chaff from the grain. There are acres of land dotted with – and buildings chock-full of – historical displays and demonstrations that bring the folks of this year in the 21st century back to the ways of yesteryear – if only just for a couple of days.

An estimated 15,000 folks came out that year to watch the old-style threshing. Voss Park has hosted the Bee every year since then. The non-profit event was changed to a two-day event the following year, 1968. It is coordinated by dozens of volunteers each year and has grown beyond the threshing by leaps-and-bounds.

Below, the Cross-Counties Connect photo gallery from the 2014 Butterfield Threshing Bee continues: 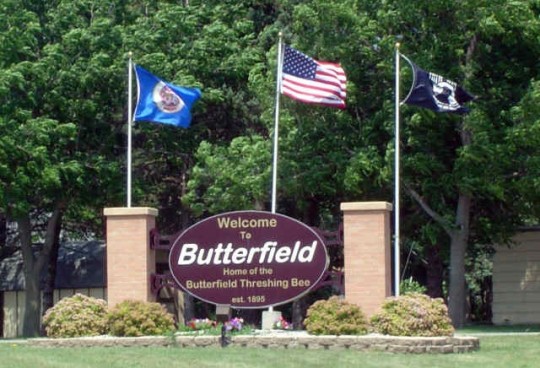 The way many remember Butterfield, ‘The Bee’

The threshers were here

Butterfield – the way it is remembered